There are five fields with access by FREE Shuttle Bus. 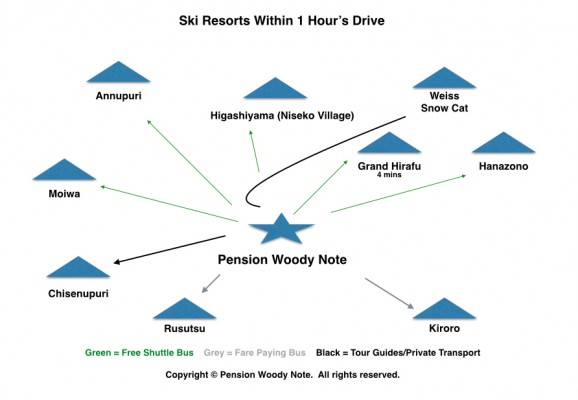 Niseko United, the four ski fields that are Niseko. This link opens the Niseko United Web Cam page. The Web Cams are:

Grand Hirafu Ski Resort is accessed each morning by the FREE Pension Woody Note bus which will deliver guests to any one of the three Hirafu starting lifts: Hirafu Gondola, Hirafu Welcome Center (Centre Four), and Ace Family Pair. Toshio San will pick up at the Hirafu Welcome Center at 17:00 Beer Time Bus or return is by Hirafu shuttle bus which drops guests at the pension door.

Hanazono Ski Resort is accessed by FREE shuttle bus (Bright Blue) with pick up and return to the door, at Bus Stop 2. (Please note that for the 2020/21 Winter Season this bus stop is at The Hirafu Intersection)  Hanazono may also be accessed by ski/snowboard from Hirafu which is often quicker than by shuttle bus. Keep in mind that while all the Niseko United Ski Resorts meet at the top of Mount Annupuri the distance between them at the base of the mountain is considerable.

Higashiyama Ski Resort ヒガシヤマ (Niseko Village) and Niseko Annupuri Ski Resort アンヌプリcan also be accessed by ski/snowboard for all but beginners. The alternative is to take the Woody Note bus to the Hirafu Welcome Centre and then the FREE Niseko United bus (Orange Color) which services all four resorts.

Moiwa Ski Resort is the fifth field serviced by a FREE shuttle bus. The Moiwa bus leaves from the Hirafu Intersection bus stop at the junction of Momiji Zaka and Highway 343 (at the top of the Pension Woody Note street). Less than three minutes walk even with ski gear. Moiwa may also be accessed by ski/snowboard for all but beginners, but, the ski home is for expert skiers/snowboarders with full avalanche equipment only, and then only if Gate 6 is open.

Rusutsu Ski Resort is the next most popular resort about 45 mins by car/bus from Pension Woody Note. Various tour operators run regular daily tours. For the more adventurous the Donan Bus Company services the Kutchan/Rusutsu route several times a day. Toshio San can arrange taxis for those guests who prefer that option.

Kiroro Ski Resort (on the West Coast overlooking the Sea of Japan) is less than an hours drive from Pension Woody Note. Kiroro is a very popular day trip and extremely picturesque, as indeed are all the resorts. There is a daily bus which leaves from the Hirafu Welcome Centre during the peak winter months and less frequently in quieter times.

Chisenupuri Ski Resort is a haven for the expert skier/snowboarder and the more adventurous. Less than an hour’s drive from Pension Woody Note accessed by private transport, taxi or tour operator. See our Winter Videos to tempt the senses.

Weiss Cat Skiing is former ski field now without lifts. Cat tours are run daily during the peak winter season. Cat skiing generally requires all the skiers to be of similar ability but it is not essential.

Avalanche Training and The Niseko Rules

Avalanche training can be undertaken in Niseko and is recommended for those venturing out of the resort areas. 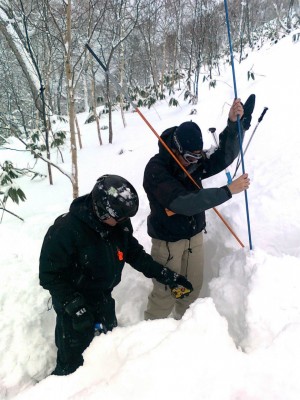 Along with access to some of the best powder skiing on our planet comes responsibility. For the safety of everyone accessing the Out-of-Bounds areas, the Niseko United Resorts have a set of RULES. There are some areas bordering the resorts that are “Strictly Off Limits” and can never be accessed. Out-of-Bounds areas are mostly defined by “Ropes” and can only be accessed when the Ski Patrol has opened the gates through these “Ropes”. If skiers and boarders duck ropes, that is go into the “Strictly Off Limits” area at any time, or duck ropes into the Out-of-Bounds areas when the gates are closed, they are endangering their lives and those of the Ski Patrol who may have to either rescue them, or retrieve their bodies. Almost every year somebody dies skiing in the Niseko area because they have disregarded the Niseko Rules.